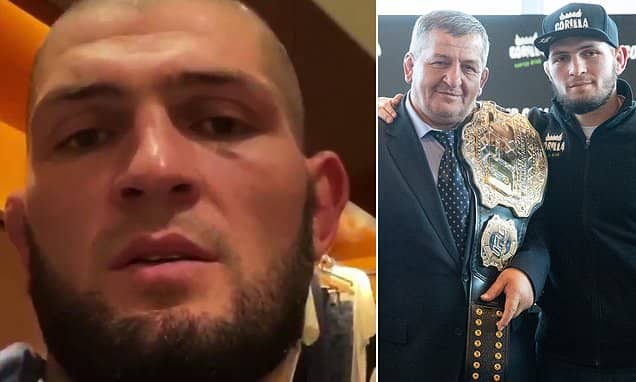 The media slated the journalist question as impolite. Some folks slated it as insensitive. But to a certain extent, we could agree that asking about someone’s deceased father over the public medium is pretty much inappropriate, no matter what the reason is.

In the upcoming 254, the Russian fighter will defend his UFC lightweight title. The contender of the UFC 254 lightweight title match has been confirmed as Justin Gaethje. The bout will take place in three weeks.

Khabib Nurmagomedov lost his father due to the complications from the Covid-19 diagnosis. The legendary trainer passed away when he was 57 years old. Just like what many other people have known, Abdulmanap Nurmagomedov is a renowned UFC legend. His passing has made the UFC verse mourn. Many UFC fighters and the fans send their condolences for the beloved father of the lightweight titleholder.

We had received this sad news back then in the Summer, but some people still seem to bother Khabib with unpleasant questions. A journalist asked Khabib about the challenges of training without his father. It seemed that the topic really bothered him. Then, he couldn’t hold it anymore and spit it out in front of the journalist.

During the UFC 254 Virtual media day, he said that he didn’t understand why the journalist kept asking him that question. He wondered what the journalist was thinking when asking this sort of question.

“I don’t understand when people ask me “how difficult is it for you to train without your father?” Khabib added.

Well, just like normal people who have just lost his father, it would have been pretty hard for everyone to live their life without their father.

In this case, Khabib was the only natural person. He snapped at someone who impolitely asked him about how he deals after his father’s passing. But we think that Khabib was doing a great thing back then. Although he snapped, he still showed his class as a professional. So, he answered “What do you think; do you have your father? If something happened to him, what do you think, it is going to be difficult for you or easy? I am human too, of course, it is very difficult.”

Khabib didn’t swear or brought that matter up to a worse level.

He could hold his anger and answered the impolite journalist with the most appropriate answer. At least there will be something for the journalist so that they won’t make the same mistake in the future.

On the same day of the interview, Khabib confirmed that the upcoming fight wouldn’t be a chess match. He’d like to finish the bout quickly. So, he’d expect that it could finish in the third or fourth round after making Gaethje tired.

Justin Gaethje Stated that He was after for Khabib’s Submission

Justin Gaethje Stated that He was after for Khabib’s Submission